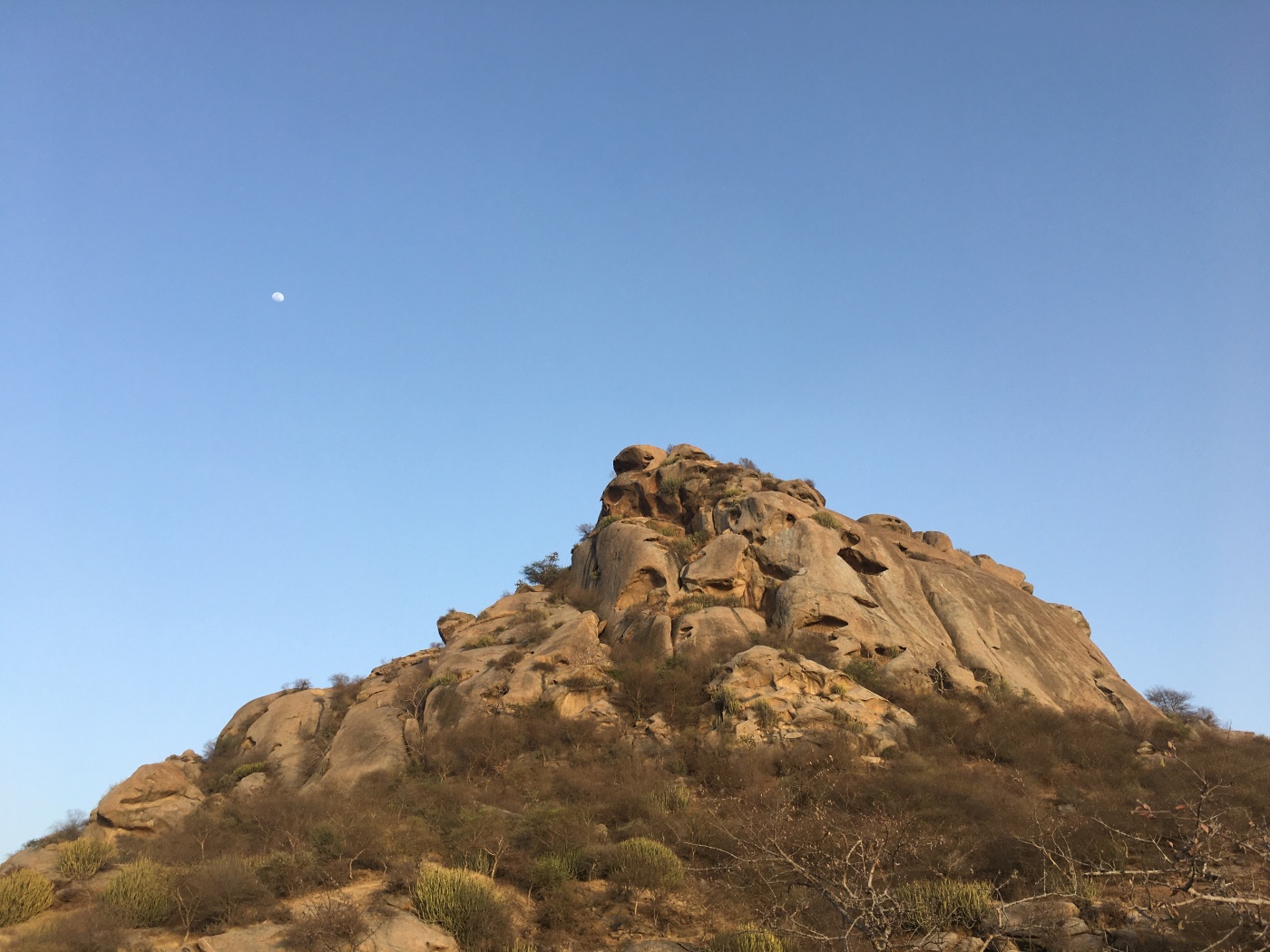 Wildlife and Mountains have always been the main subject of all my travel plans ,so, having chosen a totally different landscape this time , I kept a spare day in between to check if I could add a little bit of wildlife somewhere in our 10 days long Rajasthan road trip .And when I found Rajasthan offered wildlife on hills , imagine the degree of the “Eureka moment”.Yessssss…. unlike all other safaris that we visited, Jawai is all about watching the leopards camouflaged on the far away hills and is also the only place ever known ,where the leopards and the humans are believed to co-exist in the most subtle way.

And…..Moreover , thats how you exploit a road trip ,right??The number of last minute diversions does not matter at all.

Jawai lies in the Pali district of Rajasthan and is in between Jodhpur(150 km approx) and Udaipur.As the roads leave the city and enter the countryside you get to see the most beautiful vistas.With the vast stretches of land smeared by the small water bodies here and there, lazying camels having their siesta, long roads meeting the sky both in front and back, the smell of the smoke coming from the chulha(Earthen stoves) of by-passing villages, and most importantly the colourful turbans and the welcoming smile under those long moustaches, Pali has definitely earned its rank in my fondest memories.

Little more googling on Pali , revealed hidden gems. The famous Bishnoi Village ,where people indisputably gave up their life to save the Khejri trees(read my insta post) and the OM Banna temple where the traditional coconut is replaced by the contemporary alcohol as an offering ,further exploited the road trip 😀

We left at 9 from Taj Hari Mahal Jodhpur, believing to spend 1 hr each at these spots ,and then reaching our home stay in Jawai by lunch, as we had our evening safari booked .But then, when you are on a road trip in Rajasthan do not underestimate the beauty that is going to strike you at every mile. Inspite of getting relentless calls from Mr. Devraj Singh (our Air BNB host at Jawai), and reminding us to be on time for the evening leopard safari, we could not resist taking multiple stops in between and then ultimately arriving there at 3.

Ohhhh, did I introduce Devraj ,just as an air bnb host???Well, then, my apologies , your highness ! 😊.

Run by Mr. Devraj Singh and Mr. Surya Pratap Singh ,descendants of The Great warrior- Maharana Rana Pratap(yesss you read it right 😊😊) , Mori Jawai House , was our BNB for 1 night at Mori, a village approximately 15 km from the Jawai Dam.The reason for choosing this over the others was my sheer instinct and their description in the website.Although, there were not many reviews but there was a certain honesty and royalty in what they had written and however, mysterious it might sound, never underestimate your instinct as it always direct you to make the right choices.

The men ran the show when the curtain was off ,but the backstage was totally reigned by the ladies . Maa sa and Bhabhi sa(as they traditionally call a mother and a sister in law in Rajasthan) were definitely the ones making the stay a real “HOME”stay. Getting to have dinner with the family serving us with so much of love and attention , as if we were the real guests at their home, made us feel royal too.Right from Shengri curry to Laal Maans to Besan Laddoo to just a warm glass of turmeric milk, everything felt so organic and pure that we considered ourselves to be healthiest on that day in our entire lifetime.

And apart from the Besan ka laddo there was another Laddo as well 😇.The 1 year old baby girl.However sweet the name may sound , this tiny little angel was a real Rajputana !A die hard fan of the leopards and always enthralled by the raging sound of the gypsies, she was the show stopper of our Jawai enroute.

There are 2 sides of the Jawai dam candidly named as The left side and The right side and they are specified routes for the safari.There are no fixed gates like the Central India jungles ,but just routes.There are no strict government rules as well, just mutual collaboration between the locals ,that makes it work.The safaris costs approx 4000 for a full gypsy and 1500 for a shared seat in a gypsy. The tracking of the cats are completely manual and totally depends on the experienced trackers who have been in this job for, as long as, 40 years.

Our friend for the safari was Mr Bhanu Pratap Singh, a wildlife enthusiast and a royal blood again . After enjoying the spring sun in the Jawai Dam and watching the pink gorgeous flamingoes flock at a distance ,we moved for the hills .Earlier the leopards were so friendly with humans that they used to laze around in the footsteps of the Devgiri temple ,situated amidst the rocks.But with increase in the ingestion of tourists, the cats have receded to the further top of the low lying hills. However, when the night engulfs the place, they do come down and traverse amongst the villages, which we actually experienced and yet ,interestingly, there has been no history of any attacks till date .

Well, it was an action packed trip to Jawai. From hearing about the stories of the ancestors of the royal family at dinner , to checking our eye sight spotting the leopard camouflaged on the hill top , to taking so many diversions on our way to Jawai ,we really understood why God chose to give exactly 24 hours in a day …..because…. that is just enough to have a meaningful life even if we were alive … just for a day !

Travel Tip :Follow the Jenthra, Mandla , Bakhri route , if you are coming from Jodhpur, through the villages to reach Jawai and you can thank me later for the rustic roads that are gonna touch your life !! 😀 😀