I was asked “what is it about the woods that you like so much?”.And all I could say was “Everything!!!”

Each one of them are so similar yet so different.They are like those goodie boxes ,u never know what you are gonna get next.

And so was Bhitarkanika National Park!! As we,the usual gang(Me,Jeetu ,Alok, kaustav, Mukul and Yashu)left the highway and tookthe “RIGHT TURN” towards Paradeep( a harbour in orissa) ,the typical city view changed to long roads that diverged into the mangroves.The beautifully designed houses with  hay thatched roofs ,the intricate rice batter paintings on the walls ,the shining man-made blue ponds for prawn harvesting,the fishing nets being laid here and there and the aroma of the countryside was something we all acknowledged at the same time.

Have Fun In Doing NOTHING!!!!

“We are travellers on a cosmic journey,stardust,swirling and dancing in the eddies and whirlpools of infinity. Life is eternal. We have stopped for a moment to encounter each other, to meet, to love, to share.This is a precious moment. It is a little parenthesis in eternity.” ― Paulo Coelho, The Alchemist

Yes, we are all a parenthesis in the eternity.No mater how hard we try,we are not gonna get all that the universe has to offer so its better we cherish what we have.And that’s exactly what Bhitarkanika was.The tent of Sand and Pebbles at Kohla,although priced on the higher side, had all amenities for a perfect holiday including fishing rods and we had a lazy afternoon,sitting by the pond,feeling the breeze ,fishing ,laughing and DOING NOTHING.

As the sun started settling down,we headed for a sunset at the Pentha Beach(Yes this place has a beach too..Yayyy!!!).Whoever said the journey is beautiful than the destination, must have been in love with the roads and that’s what happened to us as well.Surrounded by canals ,paddy fields and beautiful aviaries, the road till the Pentha beach made us fall in love with it. 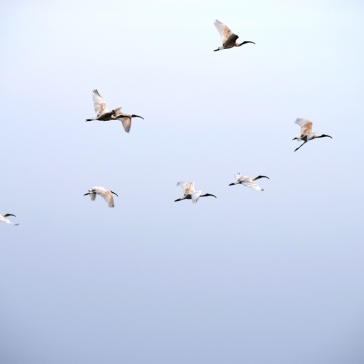 While on a vacation,the excitement is so high,i wish there were no nights and I dint have to sleep at all.But then a good sleep is important for the body to match up the excitement :)So,after a good night sleep we were all set to venture into the wild. Although we had planned to leave early so that we do not miss the crocodiles as with the rise in temperature they prefer staying inside the water,but then i guess we believe in savouring every moment so we lost track of time 🙂

With same level of excitement as my son to watch the crocodiles we boarded our boat to Dangmal and  our boatman was all happy and excited to take us for the ride.

All our apprehensions went haywire as despite the hot humid weather ,we got to see the whole clan of crocodiles just few feet away and Kalia,the 90-year old Guinness record holder,was the icing on the cake.Along with the reptiles,Bhitarkanika is a treat for the bird watchers. We were awestruck by the gorgeous and colourful kingfishers but the constant motion of the boat made it difficult to click pictures.

We landed in Dangamal where our guide took us through the mangroves and it was my first encounter with the beautiful spiky roots oozing out of the earth. After a 2 Km trek in a common trail of Dangmal,our guide said there is another stretch of 5 K.M which is more beautiful and denser than this,but generally the tourists do not prefer to go there and this was just enough for us to jump start the trek.

Only when we marched into that “Road Less Travelled” we realised that actual peace lies in the fresh air of the solitude.The singing birds,the rustling dry leaves,the canopy of dense dark green trees ,the  sighting of the go monitors in their natural habitat ,the herd of deer drinking water,fresh prey killed by a crocodile,the different patterns of the mangrove roots and the enchanting woods made us loose track of the Kilometres and the time.We actually trekked for 10 long km without exasperating even once.This place also has a rustic hunting tower of a 5th century King and a beautiful lake in front of it.We Sat by it and traveled in time. 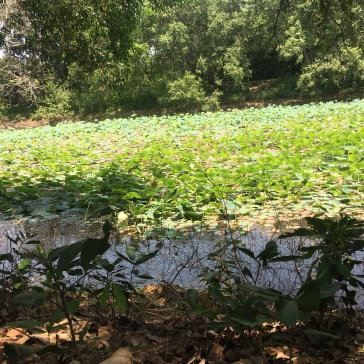 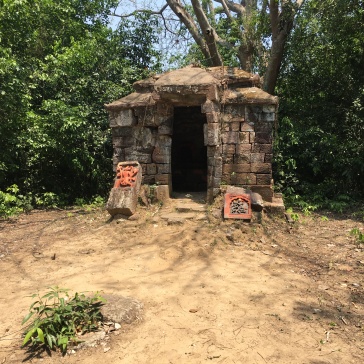 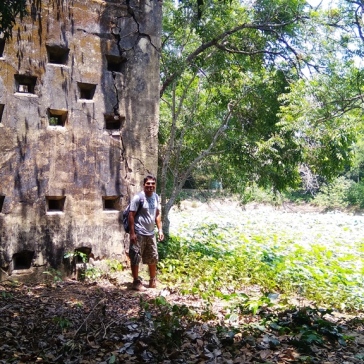 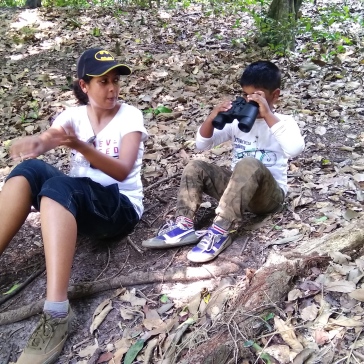 Waiting for the croc to finish its meal!!

On returning to our boat ,there he was again ,our boatman,but this time totally annoyed and frustrated as he had to wait 4 long hours for us.Generally ,tourists return half way in an hour but he never imagined we would actually go for the whole of the less travelled road and return with smiling faces .And  his annoyance was our pride :):) 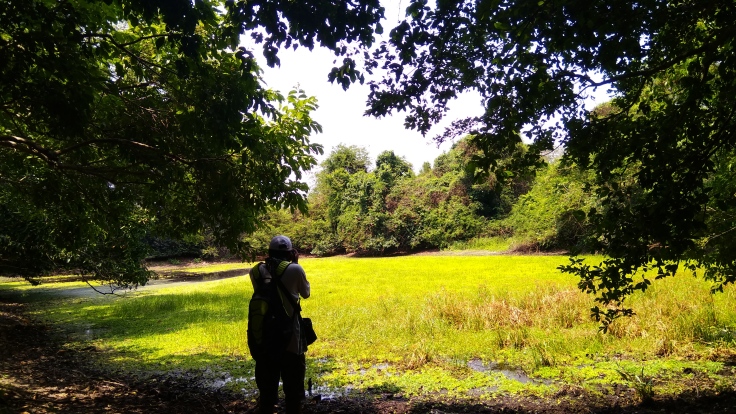 They say “We will never be the same,having seen the moon shine on the the other side of the world”, I say “We will never be the same ,having seen the Green shine inside the woods”.If you want to uplift your mood go into the wild and follow it wherever it takes.Its a completely different world inside .Its mysterious,its gorgeous and its serene but when you are there respect the wilderness.

2 thoughts on “Bhitarkanika- As beautiful as Its name!!!”